So this weekend there was a “Mormon few stunt crew” ride around the Coromandel. Warrens son had said he would quite like to go, so after some phone calls around, Warren heads off around the coro with the few, and his son. 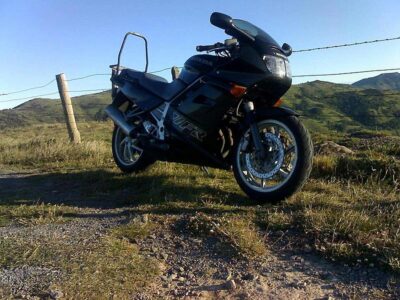 at 12:23pm I get a very broken call from carver. The reception is very bad, but I hear Hospital, helicopter, Waikato - needless to say I could piece together what had happened.

After I yelled some expletives, I figured I might be able to text carver, he may have enough reception to get and send text messages.

Yep, reply back, and I confirm Warren is headed to Waikato hospital via helicopter.

A quick stop at the gas station to load my self up on caffeine, and some minutes of pacing up and down, I start thinking about what I can do.

I probably won’t be allowed in to hospital as I’m not family, and there is not much I can do anyway, but I wondered what is happening with his bike.

More text messages to carver confirm the bike is busted, and needs a lift back to Hamilton.

So I call Pete, organise a tow vehicle, he in turn organises a trailer .. .and the two of us head north to get the bike.

Throughout the trip I was getting text messages explaining Warrens condition. Broken bones, possible head injuries, unconscious .. not good !!!!

After what seems like forever we reach the crash site. ( Here )

And what a site it was. We weren’t prepared for what we find at all. 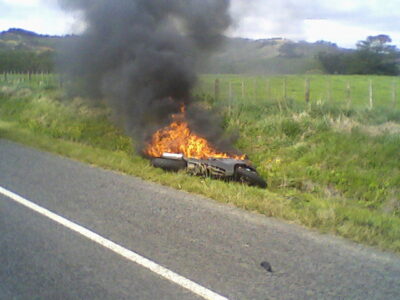 Apparently the bike had caught a blaze while still sliding along the road, and once the bike stopped moving the trailing fire caught up to it, and ignited the petrol in the tank.  boom !!!

So we hurl the bike on to the trailer, and I start pacing up and down the crash scene.

I’m pretty sure by the marks on the road that a back tyre has blown out, and the bike after 20m or so has high sided, throwing Warren over the top. Warren fortunately was separated from the bike and came to rest after rolling some way on the right hand side of the road, the bike continued sliding until it reaches the grass verge when is stops, and ignites.

3 hours later, and much sombre discussion with Pete on the way home I check in to the emergency department at Waikato Hospital.

Warren is conscious, but so drugged up on morphine. I discover his head and neck are not injured, he has MANY broken bones in both hands, arms, left shoulder, collar bone, all the ribs on his left side both from the front, and the back, a punctured lung .. geez .. the list seems to go on.

I wasn’t willing to stay very long, as his daughters had turned up, one who lives at the other end of the country, and I certainly didn’t want to cause any undue confusion.

So I haven’t slept very much. Worried about my friend, wound up by the events on Saturday, emotionally drained, generally feeling pretty average.

He’s much more conscious, but the drugs have their effect. He’s been put in the high dependency unit, and you can hear the morphine pump going every 15 minutes.

He is struggling to piece sentences together, and often drops off to sleep (or goes somewhere very quiet in his head) in mid sentence. When the morphine pump starts, he’s got seconds of consciousness before he passes out.

He’s pretending to be OK, but he’s not really.

I only stay 5 minutes or so, and leave him in the care of his daughters.

Sunday afternoon was complete crap, I was exhausted, grumpy, and generally not nice to be around. I even had a big spat with my kids which I later apologised for. 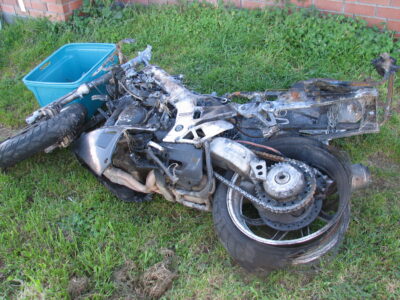 5pm and my phone rings .. from Warren !?!?!? Yep it sure is him, he wanted to call me, so his daughter called me, and put the phone on speaker, because his hands are unable to hold anything.

It sounded like to me he wanted a visit, so I offered and he thought that was a good idea.

He’s much more awake, and I can recognise Warren in his eyes again :)

I stayed for perhaps 30 minutes, but I could see he was pretending to be OK, and it was tiring him out, and of course once the morphine pump turned on, Warrens grasp on reality passes :)

I haven’t seen him yet, but he has called me again :) crazy old man !!!!! he is still struggling with sentences thanks to the pain relief, but his spirits are high which is great to hear.

He is awaiting some surgery .. .the battle truly begins now :(