The all new GWM Cannon ( Poer / Pao / P-Series / Ute ) has a terrible sound system. I mean, I guess if you’re buying a truck, good sounds aren’t the most important thing?!?
But it is important to me! Y’know … doof doof!

So, yep, I have a new GWM Cannon.
And yes, I have a weird habit of upgrading my sound system in my vehicles.
And yes, I seem to have developed a relationship with James at Mad Soundz 🤣

So literally the week I bought the Cannon I started planning the upgrade of the sound system.

The cannon doesn’t have pre outs, or any line output in the head unit. And the head unit is so integrated into the car, that there is no way I wanted to replace it.

So, a line output converter (LOC) is required 👍

A LOC doesn’t do nearly as good as a proper head unit, but I really don’t have any choice.
The head unit in the GWM Cannon controls the car settings, the air con, the car safety system .. .everything 😲

What is a Line Output Convertor ( LOC )

Firstly, about a LOC.
So, a LOC takes “speaker level input” and converts the signal to “line level output”.
A speaker cable has high power, to drive speakers, but if you’re feeding a signal into an amp, you must use low power (hence why head units mostly have “line out”, which is low level output); The amp wants to power the speakers on its’ own.
the LOC I used is from zero flex industries, and is powered. It produces a slightly better sound than a passive LOC (like from jaycar), but both will achieve the same thing.

This was a pretty easy shop for me!
Focal speakers are awesome, and I already owned the fusion powered under seat sub woofers.

The power cable runs from the battery, through the firewall behind the glove box, and into the side kick panel on the passenger’s side. 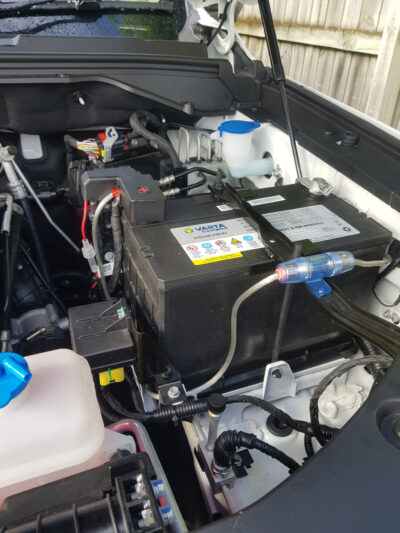 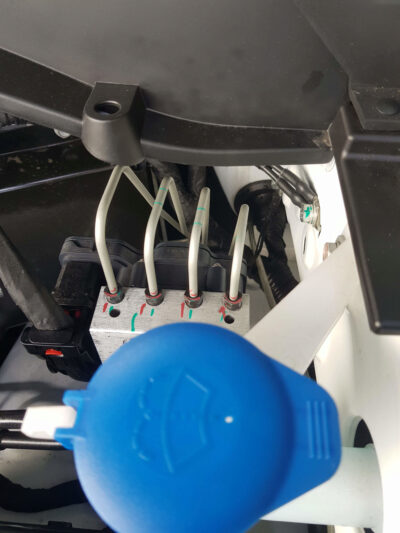 The line output converter is installed behind the kick panel on the passenger’s side. This allows access the speaker cables of the front left speaker.
Accessory power also runs from the fuse box underneath the steering wheel, to the passenger’s kick panel, and into the LOC.
As mentioned, this LOC is powered, so power is taken from an accessory power source behind the fuse box. 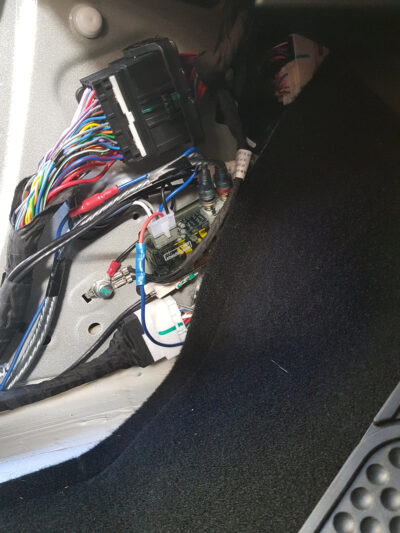 The wiring of the LOC is: 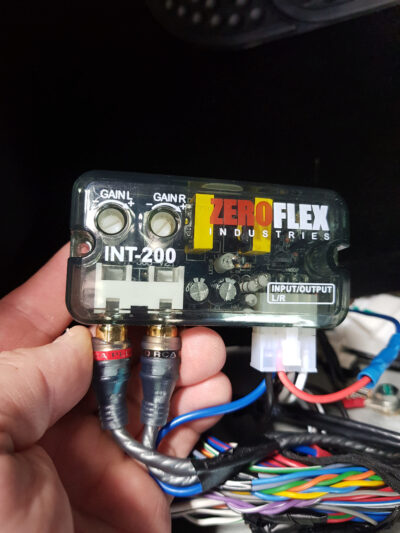 Mains 12v power (from the battery), accessory power, and rca cables are then run to the back of the truck, under the door sills down the passenger’s side. 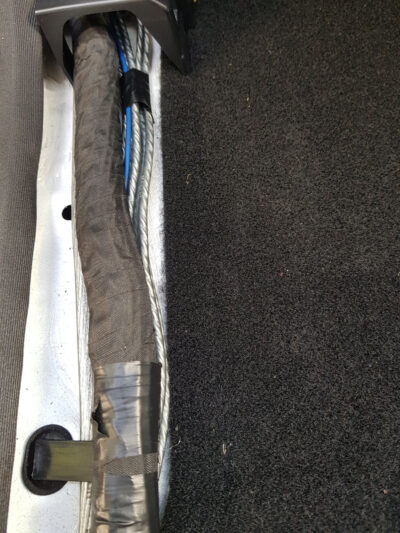 And finally, the Fusion subs are able to “daisy chain”.
So, the incoming cables are wired into one sub woofer, then the next subwoofer is wired as a “daisy chain” connected sub. 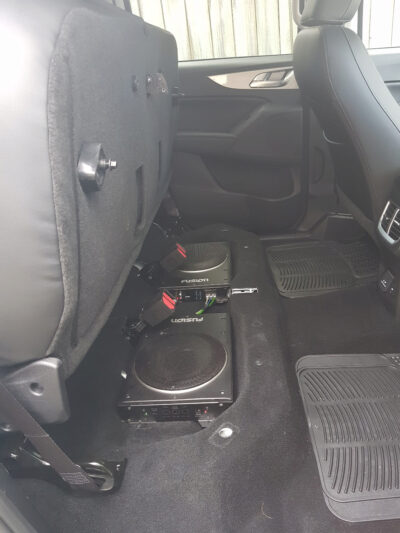 I do like it, where are the rear speaker wires located I’m the kick panel, what colours are they? Where do I connect the blue remote wire too, thank you

I didn’t photograph the door when they were off .. dumb !
But I found a sweet video that shows the door off.

Did your headunit not have load detection?Because adding an LOC to these P series headunits and disconnecting the factory speakers shuts down the head units internal amp.

Razeen, definitely no load detection.
I connected the LOC to the passenger door speaker of my P-Series, and it did not shutdown my internal amp.

I found another great video of someone removing the door card.

There’s a bloke called Savage Tech and he has a DSP amp built for the head unit that does not require an LOC, did you look into this amplifier? He also rates the focal speakers, just trying to figure out if it’s powerful enough for good speakers and sub. I enjoyed reading your post and am looking forward to upgrading my sound!

I know savage tech .. the shipping from Australia (where Savage tech are) and New Zealand (where I am) make things from him unaffordable.
Plus lots of his stuff is just bought from aliepxress, then resold in Australia.
Check my post about the decals. I saved myself heaps, not buying from Australia (mostly about freight costs, it’s cheaper to ship from China?!?!?)

I love the focals, they’ve really softened over the months, and sound really nice!

Hi Paul, your videos and images are very useful, however which fuse or wired connection in the fuse box under steering column is the remote wire to be connected to? Is there also a direct wiring harness in kick panels that can be accessed for splicing into speaker wires? rather than going directly to speakers and pulling off door trims. Thanks Darren

Hi Darren,
I’ll try and get a picture of the wire I spliced into at the fuse box.
Basically I played around with a multi meter until I found 12v the was active after power on (i.e. accessory power).
I’m not sure whether there is a harness to splice into, I didn’t even bother looking. I used a multi meter to trace the speaker wires from the door, back inside the cab, then spliced into them inside the cab.

Thanks for your kinds words .. I enjoy spreading the love 🥰

How did you get the tweeters to fit in the factory location (mine are a little too wide to push into the ring the factory ones go)?

Did you or is there a factory crossover unit for the front component speakers? Or how did you install the fusion aftermarket crossover?

Hey Blair,
I didn’t change any of the factory wiring for the front component speakers.
The truck has factory tweeters and door woofers, so all I did was replace them with a sweet set of Focals.

Hi Paul. Thanks for your information. I have managed to get full sound system replaced. All speakers work through the amp

Hey Paul, just a question, where did you mount the CPAS1080 Subwoofer, my customers GWM has no room under the front seats and behind the rear seat there are 2 vents

Hi have you perhaps got any pics/vids on removing the head unit?I’ve ordered an android replacement unit for my commercial and looking to replace the radio in 2 weeks.

@jason the subs are under my back seat . .there’s a pic up there ^^

@Fanie No sorry, I never removed the head unit

Hey Paul, did you have you use aftermarket speaker spacers for the replacements or were they direct screw-in for aftermarket replacement? Also thanks for providing an helpful overview of your setup as well, always appreciated when you find different mods and tips for your own vehicle (I’ve found this originally from your auto-volume YouTube video so thanks for that find too, I had just assumed I was stuck with it).

Hey Paul. Mate I’m trying to install underseat subwoofer apparently I can just join them straight to door speakers anychance u remember what colour they were. Would save me time pulling doors off to have a look. Cheers

@peter
Nah sorry mate, I run cables into the door and attached to the speakers, I can’t remember what colour the wires were.
and yes, you can takes the sound from whatever speaker you want