A trip to bush in the new GWM Cannon showed up some need for better lighting 💡.
I arrived in the bush with Matt at a bit passed midnight; Matt had bought a spotlight with him, but I wanted something more permanent.
So a trip to Super Cheap Auto , and I’m undertaking a new project!
Let’s install a light bar on the GWM Cannon.

Firstly, let me say a few things about MY install.

So, with that out of the way, here is what I wanted to achieve:

So first, a bit of backstory.
I went bush again with Matt, and the lighting was ok.
Check the amazing pic I got:

I also used the weekend to try a new adventure tent that I bought from Equip Outdoors.

Back to the lights 💡:
The goal is to have a lightbar that turns on when I flick on high beam, but also has a manual “off switch”, so I can have high beam on without the lightbar turned.

In NZ we have some laws about driving lights:

Here’s the one thing I disagree with, regarding NZ laws.

Also, I’m installing a single centred lightbar, so this will be illegal as a road light.
Oh, and I already have 4 bulbs shining on high beam.

So, I bought a Ridge Ryder 31 inch slim LED lightbar.
Here is a wiring diagram: 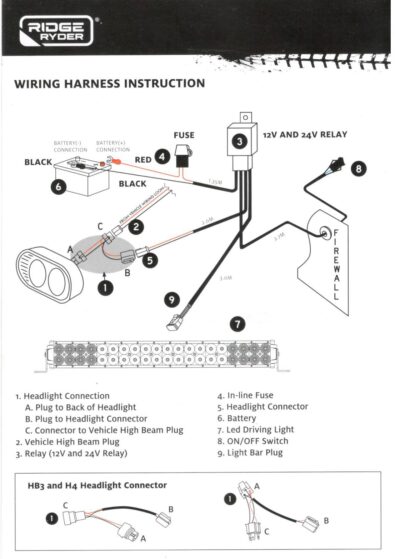 It’s all based around a pretty simple relay:

And here’s what is in the box:

Like I said previously, I’m going to install this on my roof cage, and I’ve decided to run the cabling down the back of the cab:

Also, behind the rear seat on the passengers side is a very accessible gromet in the floor.
You’ll need to remove two plastic clips to lift the rear insulation.
These things are notoriously easy to break, so grab yourself a small screw driver, lift the centre piece of the clip first, then remove the entire clip:

note, I took this pic after I had installed the relay and wiring loom, hence all the extra wires.

On the floor behind that plastic trim is the gromet that you can thread the light power cable through!

The Wiring of the Lightbar

Well, here’s my first problem!
The 2 harnesses that were supplied with the light look like this:

Great if you have traditional lights, I don’t !!!
Here’s what my headlight plug looks like:

Crap .. time to do some Googling.
After a couple of days, and some Facebook posting to an NZ Cannon owners group, I find some pics of people who have done this before !!

A dude called Paul Davis shared a pic with me, and notes: the “red wire” and the “Green/Yellow” wire. AND on the passengers side in front of the battery (I’m not sure that makes a difference?).
Well, the Green/Yellow is easy, there’s only one.

There’s two red wires .. bugger.
To be honest, I guessed, and just so happens I guessed right first time!

So, I have my high beam circuit, the lightbar is wired through the floor to behind the seat, the next bit is removing trim, and running cables.

Like I said previously, I already have fused 12v under my rear seat, so I don’t need to run that, but I do need to run a cable from the high beam circuit back to the rear of the truck where I have installed the relay (behind the back seat).
So, up comes the trim and I run a cable.
I also take the opportunity to run the cable that has the switch on it, under the trim, and up the front to the glove box.

I now have super mega lights!

Note: the flickering of the driving lights is caused by the camera, the lights don’t actually flicker.

I have just got a Cannon X and want to mount driving light to it and found your post of some help, but I have a question how did you get the red and green/yellow wires to activate the relay as far as i have found there is not 12v to the high beam?? Terry

Hey Terry,
I couldn’t see any voltage in there either, so I just trusted the advice of people that had done it before me.
Risky, but it worked 🤷‍♂️ ¯_(ツ)_/¯

Hey Paul, Did you have to solder the red and green/yellow wire to the harness provided, and if so which one did you use really helpful post btw, thanks Josh

Hey Josh,
I didn’t solder (coz I’m lazy), I used a crimp connector.
There is only one green/yellow wire, so it’s easy to find.
The red wire is the “top left” as you pull the plug out.

Can you please upload a video of a full tutorial please and does this void the 7 year warranty by any chance?

Best to check with your dealer.


I’m not sure what you mean a full tutorial? Everything you need to know is in this post 😀
Did you have a specific question?

Hi Guys, the red wire is actually not important for light bar implemntation, Yelow/Green wire is. When High-beam is on Yelow/green wire is grounded. When you have standard harness with electronics light-bar switch you need to put: RED wire to +12V behind fuse. WHITE wire clamp or solder onto Yellow/Green. Diode bridging relay coil will be beneficial to avoid spikes which can eventually destroy HighBeam LED.

Hi Paul your Cannon Ute looks great, my daughter has just bought one (Australian) and asked me to install some driving lights my reply was no problems ( that’s what I thought) on installing two led light bars on her nudge bar and wiring up the lights back to the relay installing permanent active from the battery . 2 earths to both lights and relay I went to install the switch and the same issue that you had was mine as well. So my long question is why 2 wires for the switch connection on the relay you state the yellow/ green and the red which one do you use as terminal 86 (white wire if you like) only requires one active in our case to donate high beam I am confused. Normally I would just splice into the high beam active and run that through a switch that would connect to terminal 86 the combination of the 2 wires has me lost ! Any assistance would be great.

Hi Alan,
as Jindra mentions above, you don’t actually need to use both wires.
You can tap into, just the Yellow/Green

Hi Adrian,
We are going to need way more information than what you’ve provided to help out.
Maybe hit us up via email?

Hi Adrian,
We are going to need way more information than what you’ve provided to help out.
Maybe hit us up via email?

Can you please confirm which wires are joined together from vehicle to harness.

can someone pls draw a rough diagram for what goes where.

You are a legend, thanks for the great instructions, worked a treat!

For those of you struggling, Stedi has recently released a harness.
https://www.stedi.com.au/gwm-cannon-2019-headlight-piggy-back-adaptor.html